4 Reasons Why 4 Kids are EASIER than you might think! #WhatItsReallyLike 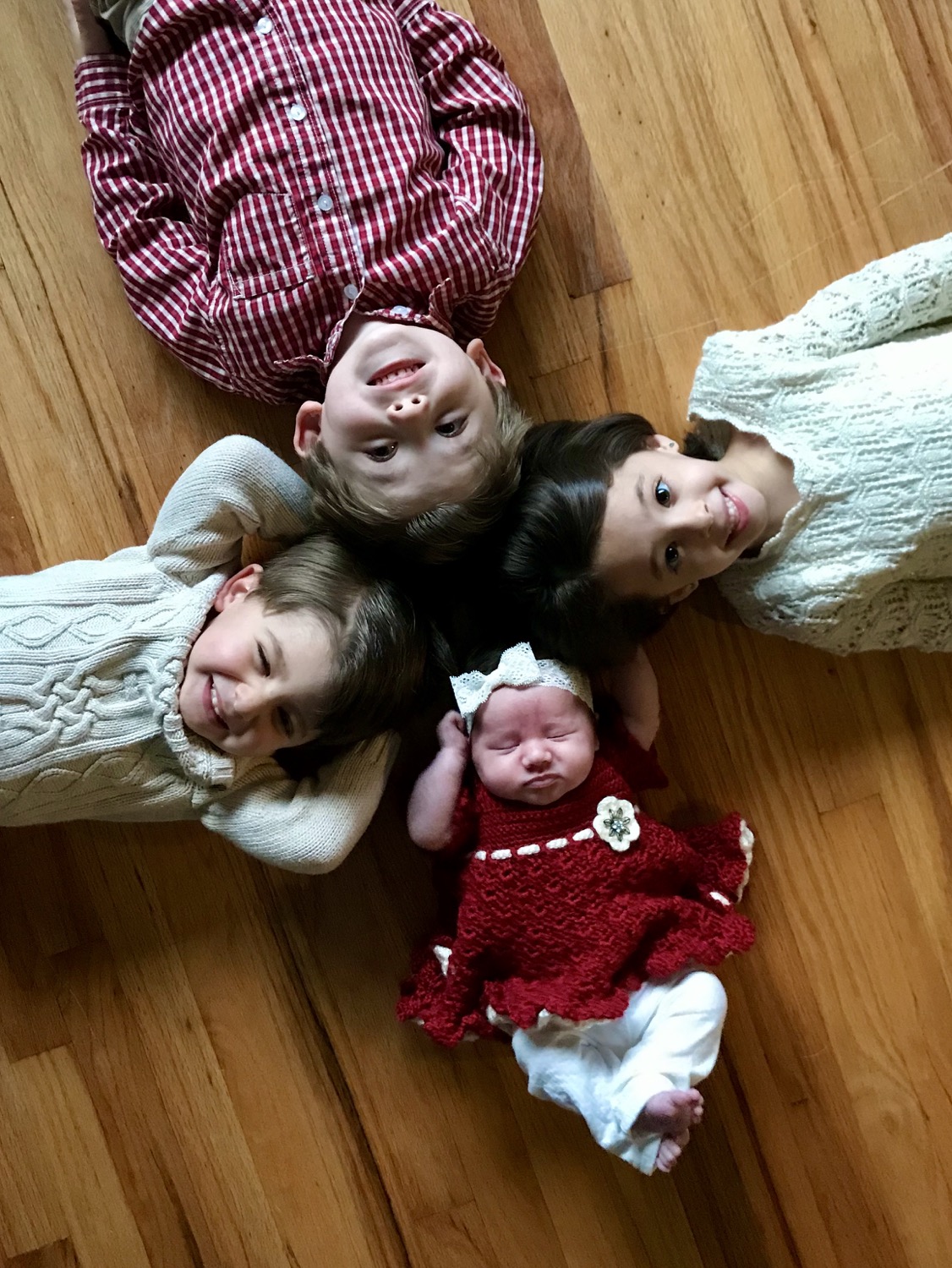 We have officially been the proud parents of FOUR kids for 8 weeks now, and the recurring question is; what is it really like?

No question, the idea of raising 4 children is daunting to most people.

I'd be lying if I didn't admit that I was terrified when we initially found out we were having a fourth!

At the time, our 3rd was in his worst stage yet. He was just turning two years old and EVERY time I turned around he'd be standing on the kitchen table, or flushing an object down the toilet that is, under no circumstances meant to go through our plumbing, lol.

The thought of adding another child to the mix was overwhelming.

As we got more used to the idea of four, and as my pregnancy moved further along it became clear that this fourth baby was going to give us a run for our money. The pregnancy itself was the hardest of them all, and the delivery itself was the most traumatic- at least for me!

But as always, these things are forgotten (mostly, haha) the second you see them for the first time.

The older 3 were incredibly excited to meet her; even our 2 year old.

I wasn't sure how much he understood about his upcoming dethroning as the baby of the family; but he handled it surprisingly gracefully and pronounced that his new baby sister was "cute".

So let's get down to what you really want to know:

Whether or not that will change as she grows and becomes mobile, who's to say?

But I actually feel that in some ways 4 is easier than 3.

Why is this the case?

I've given this a lot of thought recently, and I have some ideas about why this may be true, and I'm going to outline them and some tips that have helped me cope, for y'all below.

As the parents of 3 kids already, there isn't much you haven't already seen/experienced.

YES, every child is different, and some will test you in creative ways that their siblings did not. But OVERALL, you've been there and done that.

With this being the case, you will take things in their stride and stress less over little things that you might have stressed quite a bit about with your first or second baby.

The truth is that, in this aspect, experience is truly the best teacher, and you are more experienced than most parents if you've survived to having your fourth!

To paraphrase what someone else once wrote, parents of one child still outnumber the child.

Parents of two children feel that they can divide and conquer (one child per parent).

Parents of three children struggle with rescinding power and coming to terms with the realization that they are now outnumbered.

Parents of four children know they are outnumbered and learn to pick their battles.

Now, I realize that when it comes to this I'm speaking solely for myself- but here's what I've noticed. My older 3 children are suddenly (overall) behaving much better than I can ever remember them behaving.

Why? Because my tolerance for malarkey is significantly lower, lol.

I used to give second, third, fourth, eighteenth chances for misbehavior before sending them to their rooms, and they took full advantage of this.

My threats for punishment were taken lightly, because I rarely followed through.

I realized however, that if I hoped to make it through parenthood with my sanity intact, this would have to change.

It wasn't easy to implement initially, but I sat them down and explained that from now on, there would be no second chances.

If they did something that they KNEW they shouldn't do (jumping on our new couch is a good example of this), then they would be sent to their rooms immediately.

There was approximately one rough week while everyone got used to this, but the result has been a significantly less stressed mama, and children that kind of, sort of behave.

Now, please don't take this to mean that they're angels, haha.

There is still plenty of fighting over toys, tears, and drama; but it's far more manageable!

Y'all, I have a love/hate relationship with routine.

Part of me wants to just go with the flow, but the reality is that life with children is just SO MUCH EASIER when you've got a routine.

This isn't to say that we never take a day to just chill and recharge our batteries- because I truly believe this is essential. #selfcare

But generally speaking, having some sort of routine gives them an idea of what to expect day in and day out- which makes for well adjusted children.

Anytime we are off our routine I can see the change in their behavior, and spoiler alert- it's never for the better.

Now, to do lists have become my way of getting things accomplished, and honestly? It's something I wish I had started doing sooner.

Realistically I NEVER finish everything on my list on any given day.

There are always tasks that get shifted over to the list for the following day.

Sometimes, this will go on for several days, or even weeks.

But there is absolutely no doubt that I accomplish (and remember) far more tasks in a day when I have a list to work on.

For me, personally, this list has to be written down.

For one thing, it feels damn good to cross stuff off my list, lol.

For another, if it's not written down, I will forget. #mommybrain is real y'all.

I'll try to revisit this as our little miss grows to evaluate whether or not I still feel this is all true, but for now. . .at the 8 week mark, this is my truth.

Please don’t take all this to mean having four kids is easy! You’re still keeping four humans alive, plus yourself, lol!

Many days I’m holding it together through a combination of coffee, yoga, essential oils and wine! Do what gets you through. 💗

In the diffuser: Release

In the wine glass: 19 Crimes

Making MONEY from HOME- All About that #PassiveIncome

These are a few of my FAVORITE things- Baby Edition